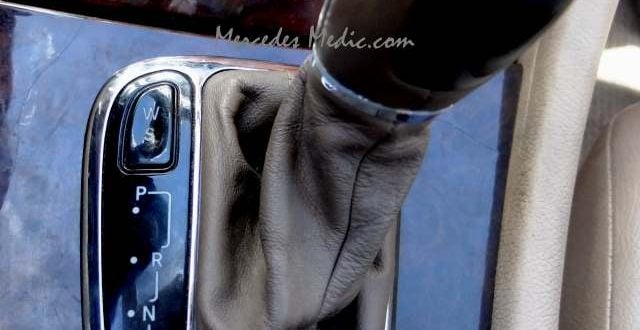 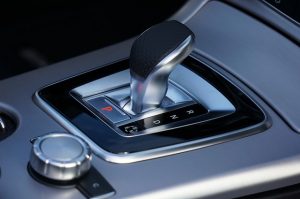 Shifter stuck in Park? You start your Mercedes-Benz but realize that the transmission gear selector won’t move out of Park. The shifter can’t be moved from Park (P) to Drive (D). Or you turn off the car but can’t move the shifter back to Park. Don’t panic; this is typically not a transmission problem. In this article, we will show you how to get the car out of park manually and how to troubleshoot gear selector shifter problems yourself. We discuss the common Mercedes-Benz stuck in park problems.

If your Mercedes-Benz automatic transmission gear selector is stuck, you can manually move the shifter from P to D (or D to P) using the shifter override feature found on almost all Mercedes-Benz models, including E-Class, C-Class, CL-Class, ML-Class, SLK-Class and other models. This will allow you to drive the car again instead of towing it. 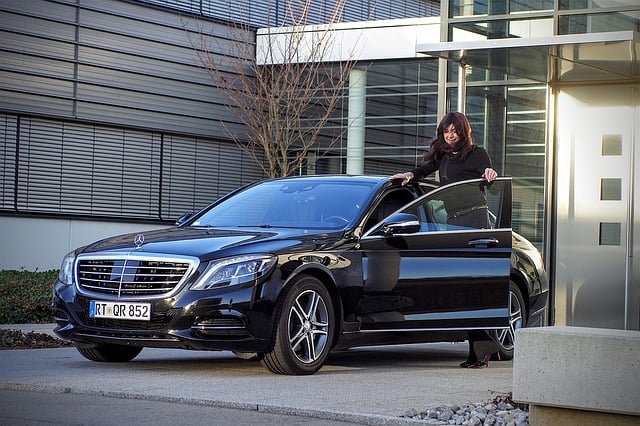 Your car starts fine, but when you try to move the shifter into Drive, the car won’t shift. You notice that the shifter is stuck and hesitates to move. Here is a list of typical symptoms related to the automatic transmission shifter stuck.

Mercedes-Benz cars that are equipped with automatic transmission have a gear selector shifter interlock safety feature. This safety feature locks the shifter in Park when you turn off the ignition. If you need to move the shifter out of Park and into Drive, you  need to reinsert the key into the ignition and turn it to position I or II.

The interlock mechanism will allow the shifter to move out of PARK when both of these conditions are met:

Here is a list of the most common reasons why the gear selector does not move out or Park.

If the shifter on your Mercedes-Benz will not move out of park, the first thing your should check is the battery. Once you confirm the battery is fully charged the two most common problems are a defective brake light switch or a shifter module is damaged.

Gear Shifter Assembly
The shifter assembly (gear shift module) may fail due to wear or internal failure. The shift interlock solenoid which is located inside the shifter assembly can fail or quit working. Plastic parts inside the shifter can break. In this case, you will need to manually get the car out of park until you get the part replaced.
Hint: If you look at the gear selector on your instrument cluster, and it doesn’t display the current shifter position such as P, R, N, D, it is a good indication that the shifter module is defective.

Battery
One common reason for the shifter not getting out of park is low battery voltage or dead battery. If your battery is dead, replace it before you proceed with other repairs. Replacing the battery on your car is very easy, and you can replace it yourself without the need of a mechanic. Here are several Group 94 batteries on Amazon that are exact fit for most Mercedes-Benz cost and cost a lot less than the battery that you buy at the dealer

How to Manually Release Shifter Stuck in Park

Do not force the shifter into gear. You could break other parts by forcing the car into drive. Instead, try the following steps to manually get your car out of the park. You can also use the same procedure to get the shifter from Neutral or Reverse into Park position and remove the keys.

In the following video we will show you how to manually get a C-Class W203 out of park. The instructions are similar for other Mercedes-Benz models including E, C, S, CL, CLK, CLS,  ML, GL, GLK, SLK Class. Just look around the shifter moudle for an access hole. It will be covered with a plastic cap in most cases.

Note: Manually getting the car out of Park (or into Park position) does not fix the problem. You need to find what is causing the transmission shifter not to move and address that issue. This method is only a temporary fix and should only be used in case of emergencies. Transmission may operate on 2nd gear (Limp Mode) until you get the shifter problem resolved.

Read trouble codes. Get a hold of an advanced diagnostic scanner and read the trouble codes. Ask your friends who own Mercedes-Benz if any of them owns a Star Diagnostic Scanner. If not, consider getting a diagnostic scanner, they are affordable, easy to use and it pays for itself. Here is one of the best OBD2 scanners for Mercedes-Benz. It will scan most control units on your Mercedes-Benz and point you to the problem. Using an OBD2 scanner is very easy even if you have never used one before. 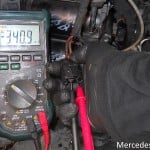 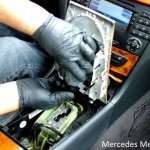 If the Mercedes-Benz shifter is still stuck and transmission can not be moved out of park position. It is possible that the shifter selector module is defective. This could be due to a plastic shifter inside the shifter that has broken or drinks getting spilled on the center console. This is a common problem with Mercedes-Benz S-Class W220 S430, S500 and CL-Class models such as CL500 and CL600. If you have a S-Class or CL-Class and are handy with tools, you can open the shifter module and replace the broken plastic inside. You can buy a Mercedes Benz S-Class W220 Automatic Shift Gear Repair Kit on Amazon.

Is the shifter interlock feature required?

Yes. Shift interlock mechanism is a safety feature on your car. It prevents the car from accidently getting out of Park unless the ignition is turned on and the car brake pedal is pressed.

Do all Mercedes-Benz cars have a shifter unlock / override mechanism?

Yes all Mercedes-Benz cars 200o and newer have a shifter lock feature.

Tried the manual release but still, can’t get my Mercedes-Benz out of park.

Try using a different object to manually release the shifter.

Can I lubricate the shifter mechanism?

You need to be very careful if you decide to lubricate parts of the shifter mechanism. Do not get any liquid n the electronic components of the shifter. You can lubricate the moving parts including the ball and metal steam. If you are not sure what to lubricate, do not try to do this.

How can I get my Mercedes-Benz out of PARK in order to tow it?

Use the method described above to get you Mercedes-Benz out of park.

I can’t find a shifter release on my Mercedes-Benz.

Some models such as S-Class W220 and CL-Class didn’t have a hole for you to manually release the shifter from Park. They can still be manually moved into park. Watch the video on this article on How to get an S-Class out of Park.