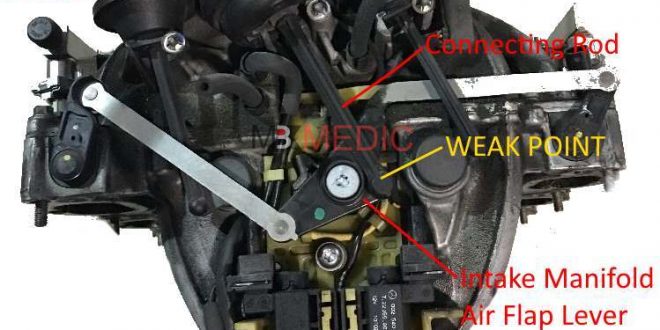 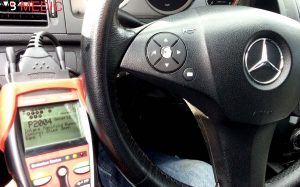 A common failure point for Mercedes-Benz cars equipped with the M272 (350) and M273 (550) engines is the intake manifold air flap lever. When this component fails your Mercedes-Benz will turn on the check engine light triggering any the following codes:

To fix this problem you will need to replace the intake manifold air flap lever using Repair Kit 2721402401. This part is located by the intake manifold. When the lever breaks the intake air flaps can no longer be controlled by the vacuum actuator. The flap may break due to wear or because of excessive carbon built up near the intake valves. Over time the plastic becomes brittle and eventually fails. Once the lever breaks the pull rod disconnects from the manifold air flap lever. The part is the same design for the M272 V6 and M273 V8 engines.

Weak material used in construction of the intake manifold air lever is the main common cause of Mercedes P2004 codes. If you have a broken manifold air lever you may want to consider replacing your old lever with a high strength aluminum design. Go to Amazon to check the price on Aluminum Mercedes Intake Manifold Air Flap Kit. An aluminum part is less likely to fail again and is much better solution than the plastic OEM lever.

The least expensive solution is to replace the broken Mercedes Benz M272/M273 Intake Manifold Air Flap Runner using a repair kit. Note that in the past dealers did not sell the lever only but sold a complete intake manifold. Buying a new intake manifold is too expensive and NOT necessary. This problem can be fixed by replacing the manifold air flap lever only.

To complete this repair at a minimum you will need the following: