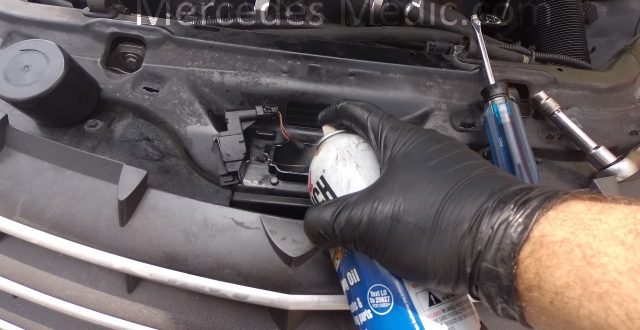 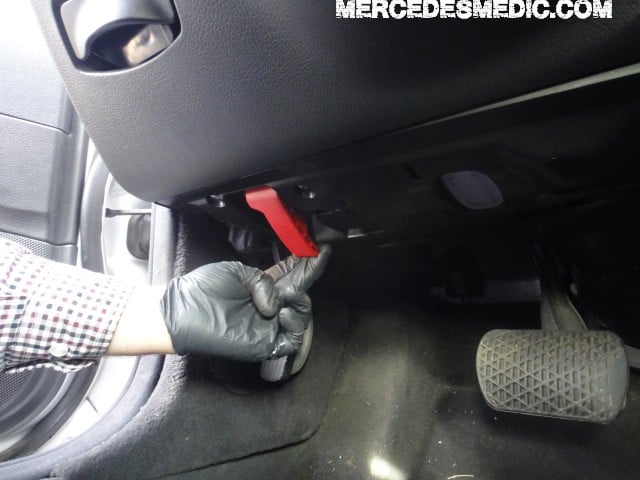 You pull the hood release lever under the dash but nothing happens. The hood doesn’t popup because it is stuck.

One of the most annoying things that can happen to Mercedes-Benz owners is a hood latch that is stuck and won’t open or pop up. Hood problems usually come up at the worst time. Often you may be in emergency situations and you don’t have time to go to an auto repair shop to have the hood diagnosed.

Some common hood problems that we have seen on many Mercedes-Benz cars are:

In this guide, we will cover most of these problems  and possible solutions.

Normally you will go to open the hood and you should hear a pop and the hood lifting up an inch or two. Then you manually have to release the hood.

The first lock is released by pulling on the hood release handle under the hood. At this point, you should hear the hood pop.

Second, is released by pressing on the hood release tab under the hood.

If your hood doesn’t open or close properly it can be because of dirty or rust in the hood latch mechanism or rust in the release cable. The good news is that typically it is not very hard to fix a hood problem. As soon as you start experiencing hood issues, it is best to address the issues as the problem may get worse over time.

If the hood release pull tab is broken than you can use a stiff wire to put through the front grill and pull on the hood release. Once you open it, make sure to replace the Hood Release Handle. They can be purchased for under $15 on Amazon, and can be replaced easily.

Why does the hood latch get stuck

You may be wondering what are some of the most common causes that will stop a hood from being able to open or close properly.

Your Mercedes-Benz hood latch may get stuck or sticks due to lack of lubrication. That is why it is important to keep the dirt off the hood latch and the hood release cable. The latch can get sticky due to dust, dirt and rust. The cable can also get sticky.

There could be several reasons why the hood will not open. In most cases the problem is the hood release mechanism or the hood latch. That’s why it is important to lubricate the hood latch at least once a year. Use a lithium grease spray such to spray the different hood latch components. Liquid Wrench works great for this purpose.

Another problem with a hood that will not open is that it may be damaged. This typically happens after an accident. Even a small misalignment of the hood may cause the hood to not close or open properly. In this case, you should try to properly align the hood. If that is not possible, you can adjust the hood stop pins on each side of the hood. They can be adjusted up and down. Try to adjust them down to see if your hood will open and close with no problems. Make sure to not lower them too much as that can cause the hood to vibrate when you drive.

On certain Mercedes-Benz models a spring is used to allow the hood to pop-up. There is either one spring at the center of the hood or two springs on the sides. If the hood doesn’t pop up but you can typically lift it by hand then these two springs may need to be replaced.

Some Mercedes-Benz models have two latches on the hood instead of just one at the center. It is possible that one of the hood latches may open but the other may not. If this happens to you, you may want to try spraying some lithium grease at the hood release.  This may allow to hood latch to unstick and start operating normally. Also try having a friend help by pulling and keep open the hood release under the dash while you try to jiggle the hood up and down to open it. Once you get the hood to open check the cable that releases the latch. It may need to be adjusted. Quite often the cable may get loose and come off the slot that it should be on.

Trick To Help You Open A Stuck Car Hood

Here are some tricks that you can use to get your hood to open.

How to open the hood from outside if you have a broken cable. 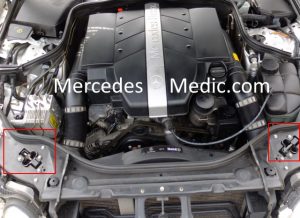 If your cable is broken you have a couple of options on how to open the hood.

The second method to get the hood to release is to access the hood latch release from underneath. This is more tricky and a bit more difficult. Before you do that use a flashlight to check if the hood cable is in the right slot. Very often the cable falls off the slot and no longer can release the hood. In order to do this need to remove the plastic covers under the engine/the splash shield. This will give you access to the back of the headlights and the location of the hood latches. You will need a ratchet with several extensions on it to get to the two bolts of the latch. Remove the two 10 mm bolts and you will be able to lift the hood.

Note that after you remove these two bolts you may only be able to lift the hood a few inches. This is enough to allow you to put your hand through and manually release the hood. 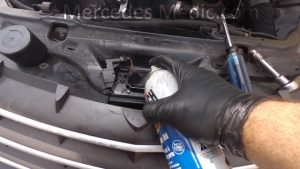 If your hood is starting to act up, you should pay some attention to it before it gets any worse. You don’t want to be in a situation where the hood will no longer open. This could cost you headaches, time and money.

Instead, get a hold of a lubricant and spray it on the latches and the cables. While WD-40 works well to unstick parts, it is not a good lubricant that will last. What you need to use is a lithium spray grease like this Liquid Wrench Spray which you will find on Amazon. The good thing about a lithium grease is that it will not run like WD-40 and protects against rust and corrosion.

Spray the lithium grease at the hood latch but also spray it at the cable and try to operate the cable a few times.

Your Mercedes-Benz may also show a open hood / close hood error message on your instrument cluster but the hood is closed. This is most typically caused by the hood latch micro switch.

Part of the hood latch is a small on/off switch known as the microswitch this could be defective. Before you go and replace it, make sure that the wire harness that goes to the micro switch is not loose or unplugged. This is a common problem. To fix this issue all you may need to do is plug electrical plug and make sure it is not loose.

How to replace the hood latch mechanism on a Mercedes-Benz.

Replacing the hood release mechanism is very easy once you get the hood to open. The hood latch is held in place with two bolt. You will need a 10 mm open ended wrench or a socket. Remove the two bolts. You should be able to pull up the latch. On the back you will have the cable that you need to remove and the electrical connector needs to be unplugged from the micro switch. Watch how easy it is to replace the hood on this Mercedes-Benz SLK. Instructions are similar for other models such E-Class, C Class and ML-Class.

Most hood latch mechanism can be purchased online for much less than from your local auto parts store. We have prepared a list of the Mercedes-Benz models and the latches that fit each model.

Where to Buy Replacement Hood Latch for Mercedes-Benz

If you lubricating the hood doesn’t solve the problem then and you have tried any possible solution, it may be time to replace the hood latch release. The part is not as expensive as you may think if you can purchase the parts online. Below we have listed several hood latch releases and parts number for different Mercedes-Benz models. If your model is not listed use Amazon Auto Parts Finder for new MB parts or use section to search to find the correct part for your car.

Some hood parts may be more difficult to find and that is when eBay comes in handy, as you will find many used parts. For example, a search for Mercedes-Benz hood release spring returned several results. You should be able to find the part you need there.

how to open a stuck hood latch

how to open car hood from outside GL GLK Class